You Can't Make This Stuff Up

July 29, 2013
So continuing on the parade that charters are better, more innovative and, above all, allow more accountability, we have Exhibit 1.  That would be former Indiana and now current head of schools in Florida, Tony Bennett.  I'll let the Fort Wayne Journal tell you what "Mr. Accountable" did (bold mine)(graphic by Jersey Jazzman): 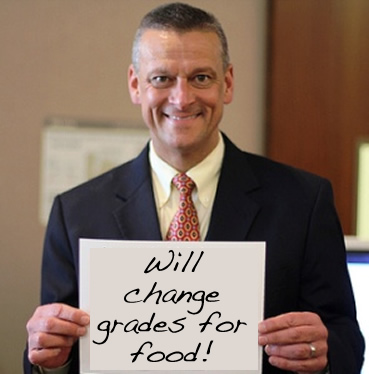 But when it appeared an Indianapolis charter school run by a prominent Republican donor might receive a poor grade, Bennett's education team frantically overhauled his signature "A-F" school grading system to improve the school's marks.

Emails obtained by The Associated Press show Bennett and his staff scrambled last fall to ensure influential donor Christel DeHaan's school received an "A," despite poor test scores in algebra that initially earned it a "C."

"They need to understand that anything less than an A for Christel House compromises all of our accountability work," Bennett wrote in a Sept. 12 email to then-chief of staff Heather Neal, who is now Gov. Mike Pence's chief lobbyist.

The emails, which also show Bennett discussed with staff the legality of changing just DeHaan's grade, raise unsettling questions about the validity of a grading system that has broad implications. Indiana uses the A-F grades to determine which schools get taken over by the state and whether students seeking state-funded vouchers to attend private school need to first spend a year in public school. They also help determine how much state funding schools receive.

He had to game the system to save a signature charter school for a wealthy donor.

He needed to game the system to save his own work.

He tried to change just ONE score to save face.

This would not only help the charter system in Indiana but also the voucher system (because those A-F grades help determine what public schools get taken over and the money for vouchers for those students to go to private schools).

Now, who was it that thought giving a simple (and simplistic) A-F grade for schools is a good idea for Washington State?

I know how many of you think that getting access to e-mails via public disclosure is terrible but when you see this:

But trouble loomed when Indiana's then-grading director, Jon Gubera, first alerted Bennett on Sept. 12 that the Christel House Academy had scored less than an A.

"This will be a HUGE problem for us," Bennett wrote in a Sept. 12, 2012, email to Neal.
Neal fired back a few minutes later, "Oh, crap. We cannot release until this is resolved."

It's not clear from the emails exactly how Gubera changed the grading formula, but they do show DeHaan's grade jumping twice.

"That's like parting the Red Sea to get numbers to move that significantly," Jeff Butts, superintendent of Wayne Township schools in Indianapolis, said in an interview with The Associated Press.

"I am more than a little miffed about this," Bennett wrote. "I hope we come to the meeting today with solutions and not excuses and/or explanations for me to wiggle myself out of the repeated lies I have told over the past six months."

One correction. It should be:

That would be former Indiana and now current Florida head of schools Tony Bennett.

mirmac1 said…
Disclosure is terrible? I guess if you like having your head in the sand.

"The people of this state do not yield their sovereignty to the agencies that serve them. The people, in delegating authority, do not give their public servants the right to decide what is good for the people to know and what is not good for them to know. The people insist on remaining informed so that they may maintain control over the instruments that they have created. This chapter shall be liberally construed and its exemptions narrowly construed to promote this public policy and to assure that the public interest will be fully protected."

Unknown said…
What is left unsaid in this article is that it actually represents a small peak into the American Legislative Exchange's world of corporate education reform. The policies in Florida serve as its model of education reform for all 50 states. This same model of using grades for schools (originally excluding charter schools from grades) was the original model in Washington State. Who, after reading this article, could actually subscribe to the viewpoint that grading schools is "all for the kids."
7/30/13, 8:29 AM

Melissa Westbrook said…
Yes and our friends over at the Washington Policy Center say this:
"School officials themselves hand out letter grades every day of the academic year. Perhaps students should make the same argument and receive a similar letter grade exemption for their work."

It's hard to believe that grown people do not see the difference between judging a student's work and an entire school's work.

That students get several grades throughout the year - the school would get one.

That student grades are not accessible to the public but school grades are. What if every student had to wear a tag on their shirt with their grade?
7/30/13, 8:34 AM

How about a scandal in which emails show one of its most prominent supporters having manipulated his state’s “high standards” system to ensure that a particular school (one founded by a major donor) scored high? Just as that same state becomes the latest to move toward dropping out of a CC testing consortium?

.... The lesson here is not “Bennett is corrupt” but “all educational standards privilege someone’s opinion of what is a good school, and government privileges the opinion of powerful interests.”

======
Common Core is a huge weapon for Government to privilege the powerful.

Excellent summary of Common Core's numerous faults can be found here =>
13 reasons Why I am opposed to Common Core State Standards by John Eppolito.
7/30/13, 1:11 PM

Anonymous said…
This story is scandalously delicious, but honestly, who is surprised by it? CYA by any means necessary to keep those tax dollars flowing into private pockets is Ed Reform procedure 101. WSDWG
7/30/13, 6:30 PM

dan dempsey said…
There is more to this that what has been discussed thus far.

It turns out that 13 schools that did not have 11th and 12th graders were penalized in categories that would have involved those upperclass students and received "0" for graduation rates and perhaps other "0"s as well.

It seems that Mr. Bennett's recalculation was to resolve any unfair "0"s.