The Future Seattle School Board (Coming to you on November 5, 2019)

June 28, 2019
First item, front and center.  Today was the deadline to submit an application for the soon-to-be vacated seat of Director Betty Patu.


The person appointed to succeed Patu
MUST
know this district well.

There's no telling who will be elected for the four spaces on the Board in November and, of course, the current Board has no control over that.

But they do control Patu's space. I set out a scenario below that could happen that makes it imperative that her spot is filled with someone who has been in this district for more than a minute. There is no "director's manual" that can substitute for someone who has been a parent/teacher/administrator in the district AND who has gone to Board meetings, committee meetings and Work Sessions.  Someone who, because of that involvement, knows the issues this district faces.  Reading past Board minutes and/or reading the Times or KUOW or this blog is not going to cut it.  (Not even with all my great reporting :)

I have heard of several people who were considering applying.  Some fit the bill noted above but some do not.  I think the Board needs to continue to seek diversity but for this one position, it has to be someone who has been active in the district.  Luckily, I believe there are people of color who would qualify.  I just want the Board to pick wisely and consider the time and place this district sits in.

Here's what could play out: 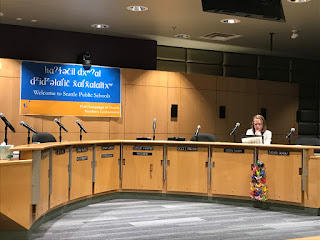 See the photo?  I took it the goodbye/thanks event held before the Board meeting on Wednesday for the departing Director Betty Patu.  (I got to tell the Patu story of her simply taking a gun away from a student one time which she told to The Stranger when she was running for office.  They pronounced her "a badass" and she is.  My thanks to her for her service to this district.)

That's Director Eden Mack sitting alone at the dais.  The election/replacement process could play out and she could be the cheese who stands alone.

That would be terribly dangerous.  Why?

1) As I wrote about Superintendent Juneau, I don't get the impression she likes working with a board and seems to try to hold them at arm's length as much as possible.  If you could have just one veteran board member and all the rest newbies,  wouldn't you like that if you were her?
2) I say this over and over - there is a BIG learning curve to the school board.  There are only a couple of people running for the Board who I think are ready and even for them, there's more to learn.
3) While those new Board members are learning, the Superintendent and staff can move much more quickly on what they want to see happen.  It's absolutely natural for a new Board member to come in and want to forge ties and goodwill with staff.  Nothing wrong with that.  But it also means that staff may try to gaslight new members who may take 1-2 years to get their footing.

Here's how it  could go:
The primary is August 6th and the general election is November 5th.

I note that this same scenario - of flipping a large majority of people - is also happening on the City Council.  For Mayor Durkan who seems to want to consolidate her power, it could also be helpful to her.  And the Mayor and the Superintendent seem quite comfortable with each other.

Exhausted said…
I hope the existing board considers the incoming board when making decisions. They already passed an unfunded K-5 Amplify curriculum. With upcoming contract negotiations, the next board may face even significant shortfalls.

Eden Mack is a Rockstar, but she will need help.

I agree. We need an experienced person to fill Patu's shoes. I'm not confident that candidates truly understand that the role of school board members.