November 16, 2012
Seattle Public Schools has this School Segmentation thing. It's a bit unclear how this segmentation is done, so  I'll direct your attention to the appropriate document and try to offer some of the missing transparency.

Here is how each school's Level is determined:

You'll notice that if the Absolute score is over 60, then the growth score is not a factor in determining the school's level. There are a number of schools with growth scores below 50 in Levels 3, 4, and 5, including thirteen in Level 4 and 5.

The Floor for any metric is equal to the Year 1 (2008-09) district-wide 10th percentile. The floor will remain constant for all five years.

There were nine schools, all elementary schools, that earned 100 points by meeting the District's 2013 goals. They were Wedgwood, Whittier, John Hay, Loyal Heights, John Stanford, Bryant, West Woodland, Laurelhurst, and View Ridge. You can take this to mean that the District's 2013 academic performance goals set in 2008 were to have all of our schools performing as well as these nine academically. There were no schools that did not earn at least some absolute points. This means that there were no schools that did not at least out-perform the bottom 10% of schools in 2008-2009. The choice of the 10th percentile is not explained.

Year-to-Year Growth Model measures if students grew as much as others in their same cohort across WA State with similar scores in previous years.


There were no schools that did not earn at least some growth points, yet Concord, based on their school report, does not appear to have qualified for any growth points because they did not have 40% of their students in the reported categories meet or exceed the median growth for their test score peers. I'm curious about how this growth score was derived. Either way, using the 50th percentile as the benchmark is more honest and slightly less arbitrary than the previous practice of using the 33rd percentile.

The District is very pleased - and rightly so - that a number of schools have advanced in level, particularly over the past three years: 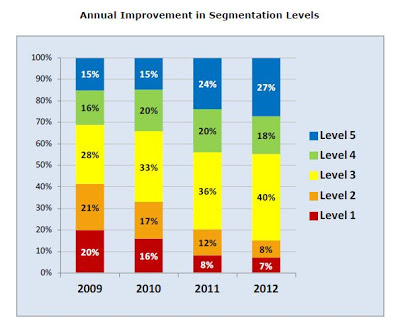 This year 16 schools advanced a level this year while only 7 retreated a level.

As with previous years, however, the Level 1 and Level 2 schools are in low-income communities and exclusively south of the Ship Canal:

I'm particularly troubled to see our two elementary SIG schools, Hawthorne and West Seattle Elementary on this list. While we can't expect their absolute scores to be much higher yet, the below-average growth is a source of concern. They did come close to the average, at 44% and 47%, but the investment was in growth and they are only doing as well as other schools without that investment. I don't know how much attention is being paid to this.

This school segmentation is used to measure the district's academic performance in a two-dimensional way reflecting both achievement and growth. It is also used to determine each school's level of autonomy in allocating some of their budget. Schools in Level 1 and 2 are told by the District how to spend some school improvement money while schools in Level 3, 4, and 5 are granted a broader menu of choices and, in cases, can make choices off the menu. This is the "earned autonomy" that was bandied about a few years ago.
School segmentation

I haven't had time to do a full report about the State of the District speech which included three schools and their scores in it. I will try to get that in this weekend.
11/16/12, 8:23 AM

Patrick said…
Is the growth as measured by the MAP, MSP, or some combination?

Charlie Mas said…
Actually, given the limited impact of school segmentation, tiny variances in individual school budgets, I sometimes question the return on the cost of the exercise.
11/16/12, 12:10 PM

Benjamin Leis said…
Is they any correlation with enrollment for the level 1 and 2 schools? I.e. are parents avoiding them?

Jan said…
Charlie said: I'm particularly troubled to see our two elementary SIG schools, Hawthorne and West Seattle Elementary on this list. While we can't expect their absolute scores to be much higher yet, the below-average growth is a source of concern. They did come close to the average, at 44% and 47%, but the investment was in growth and they are only doing as well as other schools without that investment. I don't know how much attention is being paid to this."

I wonder, Charlie. One way to look at this might be to conclude that for certain low-performing schools, for whatever reasons, the extra investment is required just to keep those schools making comparable improvement -- that without it, they would have had LOWER growth. I am not saying this is the case. I am just saying -- these schools did not end up where they started simply by chance. And we always want (and rightly so) them to make exceptional progress, so they can "catch up" to schools doing better. Is it possible that there is a "success" story for the extra dollars in just having them (more or less) keep pace with the growth of others -- at least in the early years of growth? I am not saying this is the case; I really don't know. But I wonder.

Anonymous said…
Is the average growth a norm-referenced, within district/state thing, or a criterion referenced thing? Cause if it's norm referenced, then about 49% of the schools will experience below average growth...
Rachel
11/16/12, 4:33 PM

Charlie Mas said…
The typical growth is based on the year-over-year performance of test score peers statewide.

There is little evidence that Level 1 or Level 2 schools have diminished enrollment - except for Rainier Beach High School.
11/16/12, 6:33 PM

mirmac1 said…
I should know this but please help me out. Is MAP really used for ANYTHING anymore? I mean besides 6th grade math placement and AL gatekeeping? I expect that it will go the way of the dinosaurs and district officials will pretend that little ethical imbroglio never happened.
11/17/12, 8:57 AM

MAP is now primarily used as a measure of student academic growth for the purposes of teacher performance measurement. The District uses this as the primary rationale for why they cannot drop the test.

It may be that there are a few - very few - teachers who get value out of the test as a formative assessment. However, it is administered too infrequently to be of optimal value in that role and the results are indecipherable by the bulk of teachers. Even if the MAP were effective as a formative assessment (the original rationale for it) and even if the results were clear to teachers, there remains the question of whether teachers have the time, resources, and license to individualize instruction in response to the MAP results.

Baba Blacksheep said…
Just want to point out that BF Day, in Fremont, was segmentation level 2 last year, and it is not in a low-income neighborhood. It has moved to level 3 this year.