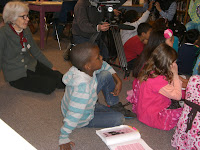 Update: Sometimes there are such pluses to what I do.  No, it wasn't seeing Caroline Kennedy (although she is a lovely and gracious person) but going to a school and seeing such enthusiasm from both students and staff.   Director McLaren was also in attendance.


Sanislo Elementary is a school I have not visited before and it has to be one of the most tucked-away schools we have.  It's tiny (about 200 students) and it sits in its own kind of glade with a huge playground.

Their teacher-librarian, Craig Seasholes, is just one of those rockstar kind of staff members.  Excited about his work, trying to do more (he has a grant in with the Allen Foundation and Seattle Library Foundation to help his school) and he handled the kids and Ms. Kennedy with a steady hand.

They brought in a first grade class (complete with their poetry scrapbooks), some third-graders and members of their Poetry Club.  They all recited a new "pledge" this one by Janet Wong called Liberty which is a wonderful pledge of acceptance.   Two key students were Quenton Slovens and Cynta-Liyah Stelivan, third-graders, who were so excited about her visit and brought so much to the event. 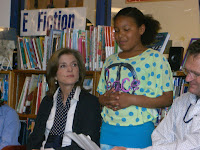 It got a little poignant when Quenton remembered they had a biography of JFK and he showed Ms. Kennedy a photo of herself reading Madeleine.  He asked her if her father had been a good president and she said, "Many people think so."

Caroline Kennedy will be at Sanislo Elementary today, visiting one of their 1st grade classrooms and meeting members of their school poetry club.  Members of the club, as well as students from View Ridge will join her tonight to read from her new poetry anthology, "Poems to Learn by Heart."

She will be the featured guest at an event tonight co-hosted by the Washington Center for the Book at the Seattle Public Library and Seattle First Baptist Church.

Ms. Kennedy has been an avid reader of poetry since childhood and has created several books around poems.

Anonymous said…
Thanks for highlighting this. Nice to read good things about a school after mistakenly clicking on a KOMO link about the Beaverton (OR) school district with 52 kids in some classrooms, yet the hatred for public education, teachers, unions, - and even kids - spewing from the comments was horrific.