May 08, 2015
I get that we don't want girls going to prom super-exposed.  (And, you would think parents would refuse to buy a dress that was too sexy. )  But we have some real Sarge Marge administrators out there as this story from the Daily News shows.

The girl in the polka dot dress is a LOT more covered up in her dress than in many other prom dress I have seen.  Not wearing a bra?  I'd bet most of the girls aren't.  (I also think it's a pretty adorable dress.)

The girl in the red lace dress looks great and she's pretty covered up but here's what the assistant principal said:

The Harrisburg High School student was reportedly told she was too busty by her assistant principal.
"She said, 'You have more boobs than other girls," Alexus told Penn Live. "The other girls have less to show.'"

Then there is the horrible prom photo of kids with a Confederate flag and guns.  Apparently not all of the parents of the students shown even knew this was happening and were horrified by the photo.  How did this get out there?  Facebook, of course.  From Yahoo Parenting:


“My son told me that all of a sudden, the girl whose house they were at to take the pictures grabbed the guns and the flag, and the parents snapped the pictures,” she says. “Why didn’t the parents stand up and say, ‘Guys, this is wrong’? Do you know what that flag means? Do you know the history behind it?’ It would have been a teaching moment.”

As for her child’s punishment, the mother whom Yahoo Parenting spoke with says she’s still deciding. “But the social repercussions — if a college doesn’t accept him or he’s not allowed to graduate — I won’t fight that,” she says. “It was supposed to be a picture that would remain private, but that’s not how social media works, so repercussions will probably happen.”

The biggest lesson this mother hopes all the students in the picture will learn is compassion. “The people in our area are very sheltered, and I think they don’t truly grasp that there are people out there who are still feeling the pain of slavery,” she says. “To be flying this flag, it’s going to bring out pain. Compassion is compassion — there are people hurting over this image. I think we should tuck it away and not bring it out unless it’s a history lesson.”

Like her son’s date, this mother believes peer pressure played a big part in her son’s poor decision making. Amy Morin, a psychotherapist and author of 13 Things Mentally Strong People Don’t Do, says the excitement of the prom might have made these students especially prone to peer pressure. “Parents should warn kids about times when they’re most at-risk of getting caught up in the moment and making a bad choice. When we’re feeling excited, we’re more likely to overlook the risks we’re taking,” she tells Yahoo Parenting. “So it’s no wonder that the teens, who were probably really excited about prom, struggled to think clearly enough to recognize their poor choices.” 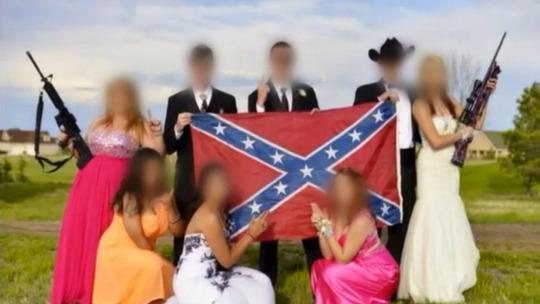 Anonymous said…
I had a Seattle (then) assistant principal purportedly tell one of my middle school students that the student " had too much badonk-a-donk to wear a dress that short." It's all pretty ridiculous.

Anonymous said…
If a recent occurence - said Asst. Principal should have a Title IX complaint filed about the comment. There is NO colorable excuse for that comment.

seattle citizen said…
I know a high school that had an uproar last year when admin, preparing for spring, talked to assembly about dress code and focused exclusively on girls, go so far as to say it was a distraction to boys.
All heck broke loose. Slut-shaming is NOT a viable response to the problem of boys and men being (supposedly) incapable of keeping focus. Anytime attention is paid merely to girls clothing, the inference is that it's he girls fault: distraction, rape...THEY are the cause. Not cool.
Me, I think it's much more effective to talk about an academic environment, generally, and how certain sorts of attire are appropriate in different settings. That said, they're teens expressing themselves...let 'em. As long as EVERYONE'S...uh...private stuff is covered.
We don't require uniforms, so who are we to judge? And if boys (or girls) are distracted by girls (or boys) attire, well, they should figure that out and deal with it.
Or we could require uniforms.
5/9/15, 5:09 PM

Anonymous said…
I like it because my fingers can move fast and and it’s like a challenge and I like it but why sooooo many ads that’s in called for that’s what the problem is you need to fix it so the better this game can be the more u are happy and others. That’s every thing I think of this came
If you want to learn more about this site: Prom Dress
6/24/19, 8:37 AM

September 09, 2022
Update on this story: As mentioned previously, the Reddit post got taken down but still a living thing via several saves. I went back and looked at it and it has over 300 comments. Gotta say, most view it as Board PR and saw it what the word salad that it is.  I don't think Hampson did herself any favors with it. end of update Well, I certainly got a lot of people's attention which is a good thing.  Updates: - The Seattle Student Union put out this press release in support of SEA. - The Reddit post has been deleted but as others have said, screenshots are forever (and I have them). - A story in the South Seattle Emerald pits Special Education PTSA president, Janis White, and SEA president, Jennifer Matters, against Director Rankin and former PTSA president, Sebrena Burr.  Janis White, the SEPTSA president, specified why she felt the need to pressure the district with a rally at this particular moment. White wants to see parents on the Special Education Task Force “[s]o that
Read more